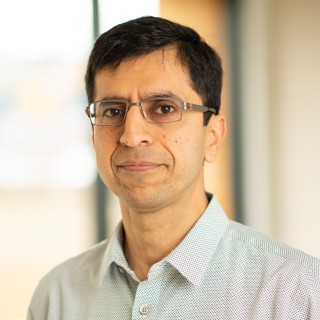 As a Senior Research Scientist at AI2, Ashish is specializing in scalable and robust methods for probabilistic inference, graphical models, combinatorial reasoning, and discrete optimization. He is interested in pushing the boundaries of inference technology to help solve core challenges in machine intelligence, particularly NLP and vision. Prior to joining AI2, Ashish spent over three years at IBM Watson and five years at Cornell University, after obtaining his Ph.D. from the University of Washington in 2005.

As a research scientist at AI2, Ashish works on semi-structured knowledge representations and scalable reasoning mechanisms, especially as they apply to question answering in complex domains such as project Aristo’s science challenge. He is interested in building systems that have a formal underpinning and that can incorporate human insight and biases, learn from limited amounts of data, leverage large knowledge bases as easily as text corpora, and provide some form of explanation or reasoning supporting a conclusion. His research pushes the boundaries of inference techniques in combinatorial and probabilistic spaces, graphical models, and discrete optimization, and uses advances in these core methods to help solve key challenges in machine intelligence, particularly involving natural language understanding and reasoning.

Since 2006, Ashish has been a recipient of various Best Paper Awards (AAAI, CP, AKBC), a Best Student Paper Award (UAI), and Runner-up Prizes (UAI, IJCAI-JAIR 5-Year Best). As a practitioner, he was on the IBM team that won in SAT Competitions in 2011-2013. He is a member of various professional organizations, including AAAI, AAAS, ACL, ACM, and ACP, and a former member of INFORMS, CPNA, and NYAS.

Prior to joining AI2 in mid-2014, Ashish spent over three years at IBM Watson at the Business Analytics and Math Sciences department, transitioning into Smarter Energy Systems and Cognitive Algorithms over the years. During 2005-2010, he was at Cornell University, working closely with Profs. Carla Gomes and Bart Selman at the Intelligent Information Systems Institute (IISI) and as a major contributor to the $10M NSF proposal that led to the establishment of the Institute for Computational Sustainability. He spent several years in Seattle as a Ph.D. student at the University of Washington (advised by Profs. Paul Beame and Henry Kautz), after graduating from the Indian Institute of Technology (IIT Kanpur) advised in part by Profs. Manindra Agrawal and Somnath Biswas.